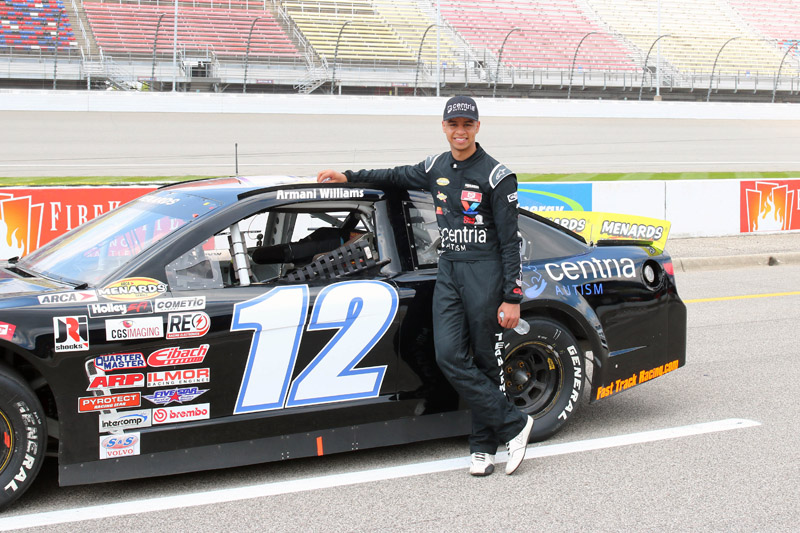 As I stated in the last blog, I developed my love for racing entirely on my own. Having loved my annual trip to the Indy 500 every May, I soon found out there was a big racetrack in Brooklyn, Michigan. When my Mom asked me what I wanted for my 16th birthday, I immediately blurted out; “I want to go to the NASCAR race at MIS!”  Now, my birthday was in January and of course the race wasn’t until June. She got this look on her face like, “Oh, no, can’t I just buy you something?”, but I had made up my mind. We drove all the way from Rochester to Brooklyn to see the Motor State 400 on the big two mile oval, and of course it rained. Not only was my very first race in Indianapolis rained out, now the same thing happened at Michigan, so I was feeling like it wasn’t much of a birthday after all.

Fortunately, later that same year, in September, my mother brought home some complimentary tickets she had received from work at Pontiac State Bank. Now why would a bank have free race tickets for their employees? First National City Traveler’s Checks was a major sponsor in both Indy racing & NASCAR at the time, and was one of the first non automotive companies that used racing to expand their business.  They figured that if they treated bank tellers and managers to a fun day at the races (including hospitality), that those same bankers would reach for their brand of traveler’s checks when a customer wanted to buy. That seems pretty basic in racing today, but at the time it was not commonly done.

So, I finally got to go to MIS for the “Michigan Grand Prix” which featured the USAC Indycars, and also the IROC series. While I was very well versed with Indy racing, this was the first time I had ever seen stock cars; my favorite, David Pearson won a spectacular IROC race, and Tom Sneva won for the first time in the Indy portion of the day. I loved every lap and couldn’t wait to go back!  That started my love for MIS and I managed to go to at least a couple races a year while I was away at Michigan State and for several years later. When Lori & I started dating, she had never been to a race, but she enjoyed our trips from Pontiac to the Irish Hills just as much as I did, especially when her favorite Bill Elliott won year after year.  Back then we would just head for the infield and drive around until we found my friend Bob in his Dodge van.

By 1990, I had finally graduated from Lawrence Tech with an Engineering degree, and received a job offer with Libby Owens Ford Glass in Clinton, Mich. “Wow, that isn’t too far from MIS!” Lori & I  eventually moved to Somerset, just 5 miles west of Brooklyn, and I bought season tickets with pit passes. It was so exciting being in the pits, and we thought we were in heaven. At first, it seemed odd to drive by the track twice a day, but it soon became a regular part of the landscape in the Irish Hills, & this area will forever be my home.

Around 1997, there was a blurb in the Jackson paper about how MIS was looking for 100 local residents to become ambassadors for the track in their communities. I quickly signed up hoping to be chosen, and was one of those who was selected for what was called the “100 Club.”  I volunteered to be on the steering committee, which allowed me the opportunity to get to know some of the track staff. One day, I was asked if I knew that they had a group that performed pre race pit road tours, and was that something I would be interested in. Was I ever!

This Pit Tour Team has the task of taking the guests of suites and hospitality down on pit road race mornings to give tours about the track history and explain pit stops etc. I remembered how excited I had been to go down on pit road the first time, and sharing in their excitement as I took them down was very enjoyable. Even though it was a volunteer position, the track did supply us with great parking, credentials, and lunch, so it was a pretty good deal as far as I was concerned. The best part was that we are done by race time, so watching the race is not an issue.

Had a few moments that stand out for me from the pit/garage tours. I took a group from Aflac down one year and a woman asked if I would autograph her picture of Carl Edwards. I explained that I didn’t work for the race team, but she insisted, “But you’re our Aflac tour guide!”  Remembering the part about “Creating lasting memories”,  of course I would oblige. As I started signing next to Carl’s name, she stopped me until her husband could get a picture of me signing it. Lol.  When the Indy Racing League came in 2002, I was really pumped up. It was a hot day, and I really overdid it and started feeling ill. Ended up spending a couple hours in the First Aid center with an IV, but recovered in time to go to my seat and watch the race. I thought I had been in every part of the facility, but could now add the First Aid center to that list !

Over the next nine years, I became the one guy in the group with the most passion, and apparently, someone noticed, as in 2010, I received a call that in many ways was life changing. I was told that the person that managed our group was moving to Texas, and would I be interested in taking over the program. Naturally, I didn’t hesitate.

While this job has really nothing to do directly with the race, it is pretty important, as the various companies that purchase suites and hospitality pay a lot of $$$, and my group plays a major part of making sure their guests have a special experience. The MIS motto is “Creating Lasting Memories for Every Person, Every Time” & I truly try and ensure that our guests experience just that. I work with the Corporate Partnerships staff of MIS; not only are they really great people, being behind the scenes making a big event like this happen is extremely satisfying.  The last few years, we have also been doing a lot of Garage Tours, so getting to take people through there is a lot of fun for both them and us!

Being the one who manages the program also means that I am responsible for recruiting my team of 25-30 volunteers. Proud to say, I have an outstanding team, and I value our friendships tremendously.  Still feel honored to be able to work at such a great facility, and never thought when I first went there, that I would find myself doing this after going to so many of the races there. It truly is a magical place.